Corryong is located in North East Victoria, halfway between Sydney and Melbourne, on the Murray Valley Highway. Set in the foothills of the Snowy Mountains the Corryong Country Inn is 120km east of Albury / Wodonga. While visiting Corryong you can enjoy many activities offered in the area, including:

Riley’s Restaurant at the Corryong Country Inn occupies one of the oldest buildings in Corryong. The building’s history is closely entwined in local history, particularly that of Mr Arnold Playle, a watchmaker from Yackandandah.

After leaving school, Arnold learnt his newspaper, stationer and fancy goods trade from Mr Styles in Yackandandah. Arnold furthered his career to a watchmaker and jeweller as apprentice to a Mr Ross in Beechworth. Mr John Whitehead, President of the Upper Murray Historical Society, tells of how his Grandfather, Arnold Playle, would lock up the shop after Saturday late night shopping finished (10 to 11pm) and walk from Beechworth to Yackandandah to spend the Sunday with his family. He would then walk back on Sunday night ready for work on Monday morning.

In 1890 Arnold built two new shops closer to the main street. Today Riley’s Restaurant is located in the original two shops where Arnold and his youngest brother Walter ran their businesses. Arnold moved his watchmaking and jewellery business (the town-side building) and Walter operated a saddler’s business in the shop next door.

This was the perfect location for Walter, as at the time the Blacksmith’s shop was just down the road (where the Commonwealth Bank is today).

Arnold expanded his shops’ stock and capitalised on the newspaper, stationer and fancy goods trade. Arnold’s account books tell many tales about sales in the shop. He was a tea merchant for Loftus Moran, the local photographer, sold Kodak film (120 and 116), and was even an optician, selling glasses – in the days of trying them on and seeing if you could see or not. Articles and ads were lodged for papers, including an ad in The Age, where the Corryong Hospital advertised for a Sister in Charge. The shop was an outlet for the Royal Mail and also dispatched the newspapers in the district. The following humorous poem was sent to Arnold, written by the bookkeeper at Bringenbrong Station.

Those Scissors. Whatever did I do with those scissors, after cutting the string through, that tied the bundle of papers strong, the mailman took out to Bringenbrong??

Me thinks, perchance, you will recall, the memory with a sigh. “What fate on earth?? Did befall, those scissors from under my eye”??

Now Mr Playle, will you please remember, next time for papers we ask, supplements are only supplied in December, supplements too, that are not made of “steel cast”.

You little thought, that to Bringenbrong, those “blessed” scissors had fled, whilst with a song, over the road that is long, the mailman with the “scissors” sped.

Sympathy for the scissors, I do not confess, such scissors want hanging — round the top of your vest, now, if you will just do as I suggest, there’ll be no need for that terrible word “bless”.

Unlike the man from Baghdad city, who purchased a load of wood, and on the pack-saddle also insisted, to make the bargain good.

In returning your scissors, I have pleasure, in composing this idle lay, for the memory of that day, those blessed scissors went astray, and a few more hairs went grey, no doubt, you’ll think you were a “J” that you did so oft’ that word “blessed” say. So tie them around your neck Mr Playle, and they’ll for ever with you stay.

Now sir, welcome your scissors (like the prodigal son we are told who wandered around this world of sin we welcomed back to the old old fold) and keep them tied below your chin.

Next door to Arnold’s shops was his sister “Auntie” Ellen, who operated a China shop in a small timber and iron building on the side street of the brick building.

A. T. Bartlett’s printing office was then run from the next building along the street.

In 1894 a small room was added to the Towong side of the brick building. It housed Corryong’s first pharmacist, Mr W. Denby, who also leased the adjacent wooden and tin roof building as a residence. Northern Assurance Company records show that a warranty under the insurance permission was granted for Mr Denby to use Acetylene Gas for lighting in both buildings.

Moving to the 1930’s, business activity in Corryong had drifted one block to the west and the building became a domestic residence for nearly 40 years. It was here that Bernard Spillsbury, the first Corryong man to enlist in WWII, farewelled his young family for the last time as he left to give his life for his country.

Corryong’s regional library was located here in 1958, followed by more residential tenants as the building slowly fell into disrepair.

In the early 1970’s the Op-Shop committee moved in and operated successfully for the next decade. A fire, which partially gutted the building, brought their occupancy to a premature end.

Restoration work began in the 1980’s when substantial improvements were made, however the original brickwork was retained, as were the Baltic pine ceilings you will see above you. These are fixed to sturdy blue gum rafters. For the technically minded, the double brick outer walls, without cavity, rest on foundations of packed rubble with every third brick laid side on. This is a style known as Colonial bond. The softwood timber flooring, derived from the New Zealand native Kauri tree, was in abundance at the time of building. It was heavily worn and was replaced with a cement slab, which Mr Whitehead helped pour. 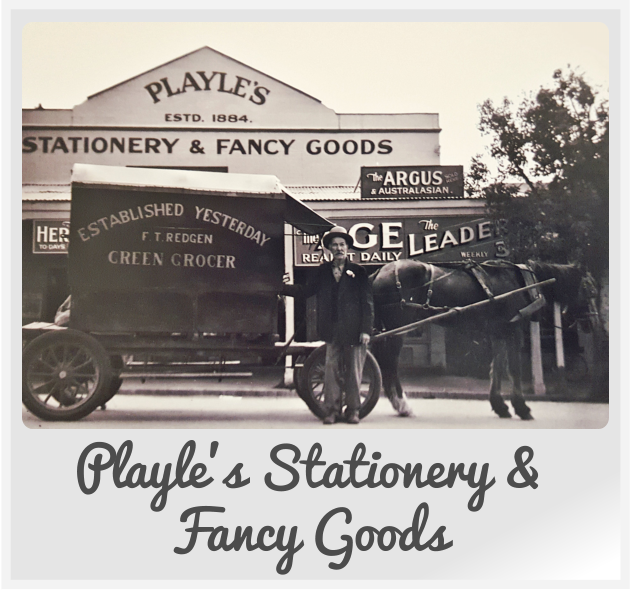 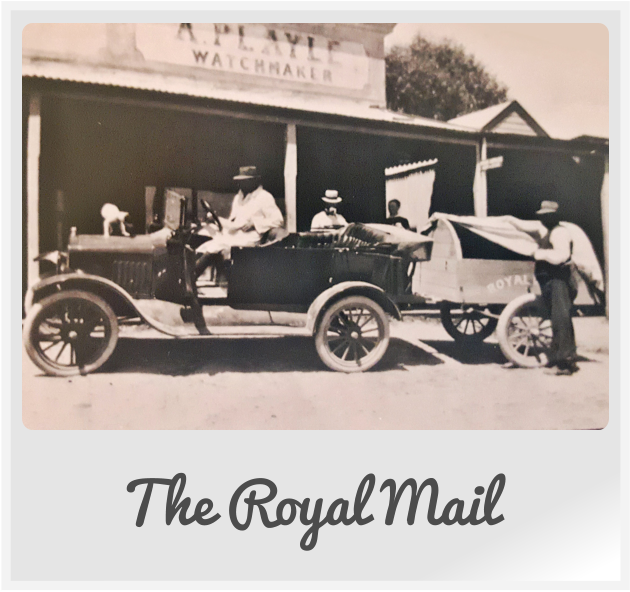 Another building on the grounds and surrounded with history is the managers residence. It was one of three houses built and transported to Corryong from Chiltern. Originally the wooden and tin roofed building was lodged next door to the Playle’s brick building. Since then the wooden building has been moved twice. First it was moved to where the Inn’s driveway is now. Years on, it was moved to where it now stands, with additional building works carried out.

Today, more than a century on from the first bricks being laid, the old watchmaker would be proud of his building; restored, modernised and housing Corryong’s premier restaurant. 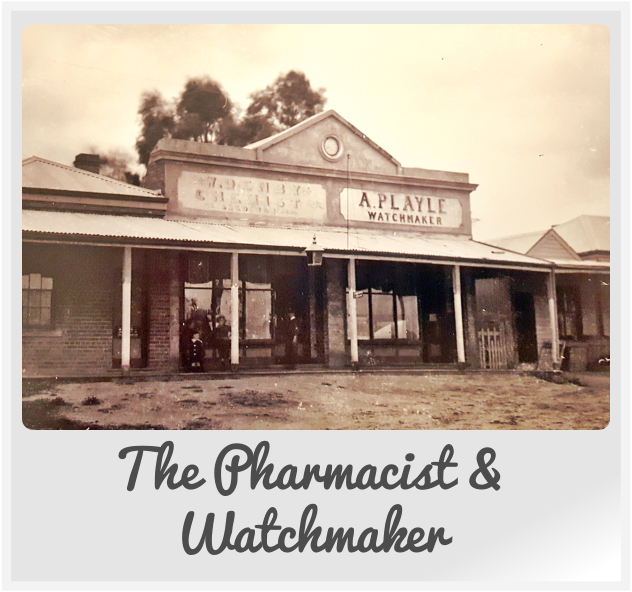 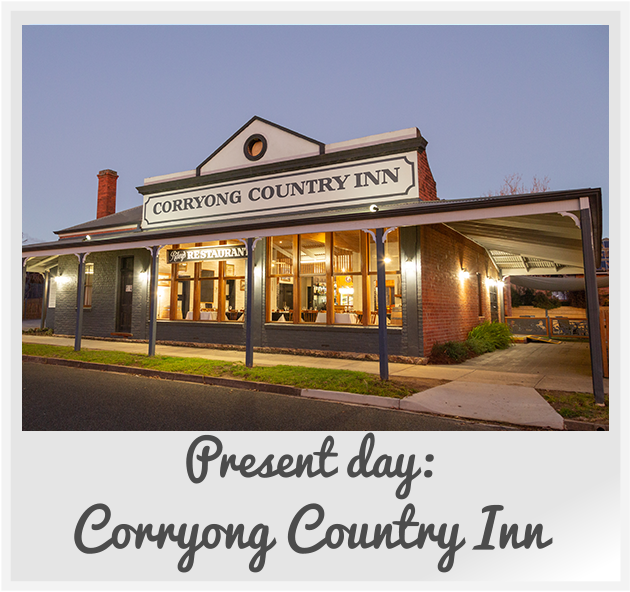